Top of the town: Mr. Rakesh Kohli, Chairman, Stag International known for sporting goods in different countries of the world. 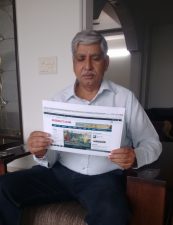 Who was your inspiration in Childhood ?

My grandfather was my biggest inspiration. I had learnt the minutest details of life from him. I learnt a lot from him about business. Like how to be a good person, how to maintain your Goodwill in business, how to help people in business and how to avoid people who do not deserve help in business.

In my formative years, I was inspired by one of my senlior Mr. Trilokanand. He had always been an inspiration for me and he made me work hard enough to do an MBA in 1982 when people have not even heard of such a course.

Which great leaders from history or your contemporaries influenced your thought process?

The simplicity of APJ Abdul Kalam Azad after achieving so much in life was worth noting and appealed me a lot. I am a proud winner of an award by respected Kalam sir for promoting an Indian brand internationally.

Atal Bihari Vajpayee ji’s commitment towards his country had always appealed me.

When did you start working on your ambition?

There had been many ambitions in life. I can segregate my life in few divisions. I had always been inclined toward business and I joined business when I was 17 years old and it had been more than 40 years now that I am into business.

I started playing on international fronts from 2005. I consider it as my second innings. I had never thought that I would be the one to waive the flag of India on the international courts.

Another thing which I wanted to do was to impart the knowledge I had attained over a period of time. That is achieved through my interaction with MBA students in and around the country.

My current ambition is to produce a world champion in Table Tennis from India. For this I had started a very ambitious project. The name of the project is Stag india 20-20 One million Players. In this we will introduce one million new table tennis player by the year 2020

Another project is Stag Talent Hunt. Under this we are going to put 20000 camps all across India. From here we will select kids from such camps to play on state and national level. We will also start an academy in every district, every state and 6 national academies equipped with best trainers and sporting goods. Kids out of the national academies will be knocking at the doors of international table tennis.

And then my third dream to have an Olympic medal for India could be fulfilled.

What do you do in your leisure time i.e. your hobbies?

I follow my passion which is Table Tennis. I also do a lot of planning for my various dream projects.

What is your fitness regime?

Who all are there in your immediate family?

My wife, Monika kohli she is an actress. My two sons, elder one in business and the younger one is a player and also in product development.

How do you maintain work-life balance?

I have a good team so normally the team takes care of all my business engagements when I am not there. Of course, I am quite occupied with tennis and we have more of tennis holidays where my wife accompanies me.

Who is your best friend and his/her good qualities?

My wife is my best friend. She is very caring and her thought process towards life is very positive. She has charisma attached to her.

What one thing makes you very angry?

Why do people get angry makes me angry.  Anger is something which itself is a very negative thing. You should at times when required should show anger but should not be angry and lose control.

What one thing makes you very happy?

My tennis achievements. The happiest moment of my life were when I held Indian Flag and when I got awarded from Kalam Sir.

What accomplishments of your life you are proud of?

I am also a player of Tennis and I represent India on international frontiers. I had played 6 world championships. My Current ranking is 30. I had won 14 titles on international level with 12 different partners. I was past president of Meerut Management Association and delivers lectures in many management institutions across the globe.

What are your contributions to your city Meerut?

I have been instrumental in sharing my knowledge of various platforms. I had also been doing lot of social activities being involved with MMA. We have been going to various places where people actually need help.  I am also associated with lot of NGO’s and keep supporting them. We have adopted some children and providing them education.

What are your future goals?

On professional front I want my one million project to complete successfully.

We are also working to bring the factory to international standards with in one year time frame. And getting higher and higher on my Tennis Ranking.

One line that defines you in totality?

I follow my dreams with passion, grit and determination and keep reinventing myself by utilizing my capacity into projects of different nature.